Don’t you like the word sub-genre? Sounds like sub and ‘John Ra’, and means a stylised part or category within a ‘genre’.

Theoretically, any street photograph might carry within it the deceit of being a still from a movie.

Richard Sandler’s photograph of the mysterious lady on the subway train from his book ‘The Eyes of the City’, might well be a stolen still from an Alfred Hitchcock thriller. Having defrauded her erstwhile lover of his cash, she is leaving on the southbound underground train while her lover – aghast – looks on from his carriage travelling north. Can he get off at the next station? Can he double back and catch her before she gets away? Will he call the cops? Meanwhile she thinks : ‘so long sucker’.

Johnny Mobasher’s photograph of the little girl looking to our right as we face the photograph also has a Harry ‘Potterish’, ‘monsterish’ feel to it? The big heads in the background and the large Yoda-like creature to the little girl’s left give it an atmospheric, mystical, magical ambience. Like a still from a Hollywood film confection 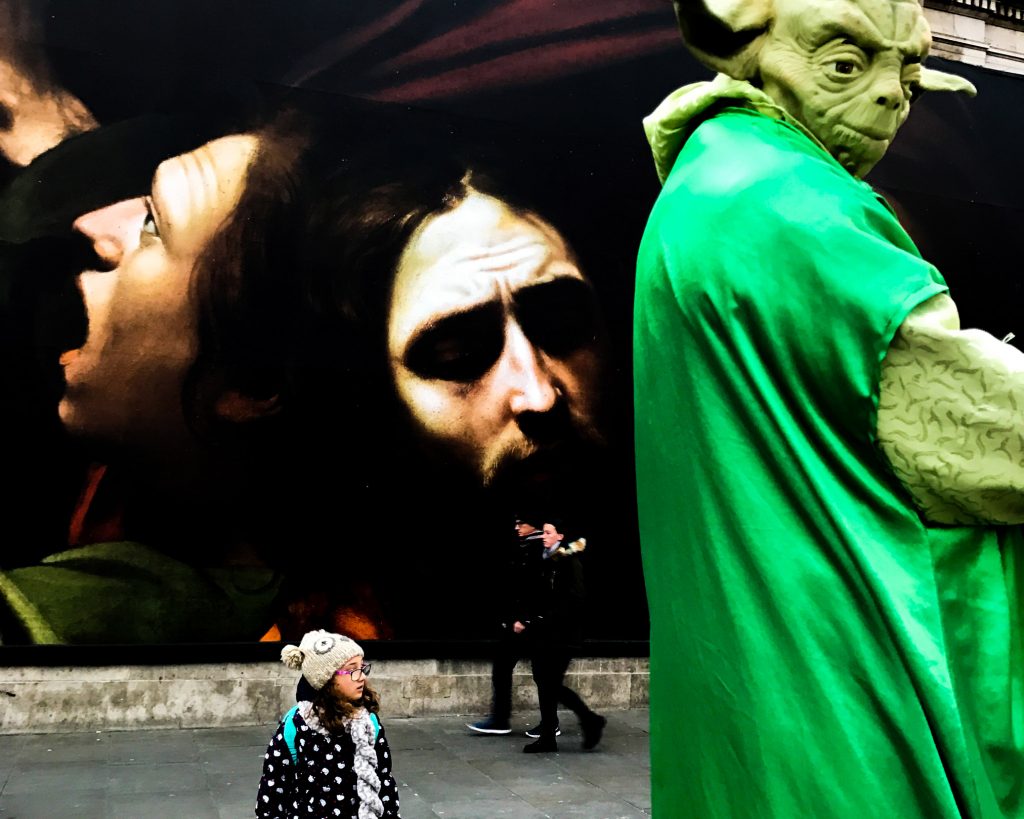 Alex Coghe, an Italian photojournalist based in Mexico, in a blog post August 4, 2012, A Journey To Discover A Sub-Genre : Cinematic Street Photography – claims that it is all about “mood, aesthetics, lighting, atmosphere, characters.”

Mood, of course, is always about aura, feeling, ambience, and is always affected by lighting, which, in turn impacts on atmosphere. Each characteristic adding to that ‘cinematic’ feel. What about aesthetics, and do I really feel any closer to the idea of what cinematic street photography is?

“You ask a very controversial question,” Andrew Mohrer, one of the leading exponents of cinematic street photography, replied when I posed the question to him. “I’ve noticed in the past that photographers can get very particular when it comes to what they consider ‘street photography’. I do appreciate that people are passionate about the genre (street photography) but…photography is an art form.”

So how did Andrew get into this sub-genre?

“I discovered (it)…early on, when I was first finding my own style” he told me. “The core idea of cinematic street photography is creating ‘fake movie scenes’. In general taking candid everyday street scenes and making them look like lost frames from a movie.”

Andrew goes on to tell me that he crops, looks at tones and edits until the art feels right. One of my own favourites is of a distant, solitary figure making his lonely way across a street flanked by the high rise of the city and busy sidewalks.

“This particular photo was taken from the Manhattan Bridge looking down on Chinatown,” he explained “I was there at the right time on this day because I caught this one at the ‘golden hour’. I had to wait for the perfect moment to catch this shot. The way the shadows and light were hitting really caught my eye. When I got home and looked at my images…I knew this felt special…so I took extra care when editing the picture to really bring it to life. I actually made a single file HDR to bring the details out which I don’t normally do. I worked on the tones in Lightroom and did some finishing touches with Photoshop.”

Mohrer appreciates his way of working might not be considered ‘de rigouer’ by all street photographers, but, to be balanced, he is pushing art, being innovative and using his own creativity to develop, what he and many others believe is, a valid sub-genre of street photography.

What have we learned? The first thing, I would suggest, to make it ‘cinematic’ street photography is that some sort of ‘free flowing’ action has been stopped and framed in an instant and made to look like it is stolen from a movie? But, of course, it is much more than this. The second thing, is, as Alex commented, a certain mood, dependent on lighting and atmosphere, and black lines at top and bottom helps. Andrew Mohrer also explains the use of other tools like Lightroom and Photoshop to help give the impression of a ‘fake movie scene’.

But why the interest in this supposed sub-genre of the art form? Perhaps, this is to be found in the close relationship between photography and film and the psychology of photographers? A fetishistic desire, perhaps, among street photographers to bridge between stills and moving action and back again. Which is why there is this connection between photojournalism (where a news story is portrayed in pictures), documentary photography (where a series of photographs are taken on a single subject – refugee camp, people coming and going from an all night cafe for example), and street photography.

Photographers, of course, are natural storytellers. Cinematic street photography is another visual prompt to build a narrative around a single frame – which, apparently, presents the illusion that the frame is taken from a film somewhere, or, indeed actually… ‘nowhere’.

The Richard Sandler’s ‘potentially Hitchcock’ frame, or the Harry Potterish/Warner Brothers efforts of Johnny Mobasher are perhaps examples of ‘accidental’ cinematic street photography, and that’s what makes it so controversial.

Is he committing street photography sacrilege? Or, is he legitimately stretching a genre into its subterranean aesthetics, while exploring and using the techniques and artistic hinterlands of street photography? And, If so, why not?