Chris Toombes : A Life On The Street

His, is a voyeuristic, heat-seeking vision of the world. A street photographer staring at the glare of a fascinating urban universe. Transfixed by the procession of life parading past his own personal ‘city drive through’. One distinctive feature of the street photography of Chris Toombes, however, is his focus on those less fortunate.

A man bearded, dishevelled and weary, strides through the Calgary, Canada streets, with a rucksack – everything he has in the world on his back. He moves toward a younger man also carrying a rucksack. For the British-born, Canada-based street photographer it was a moment of inspiration. 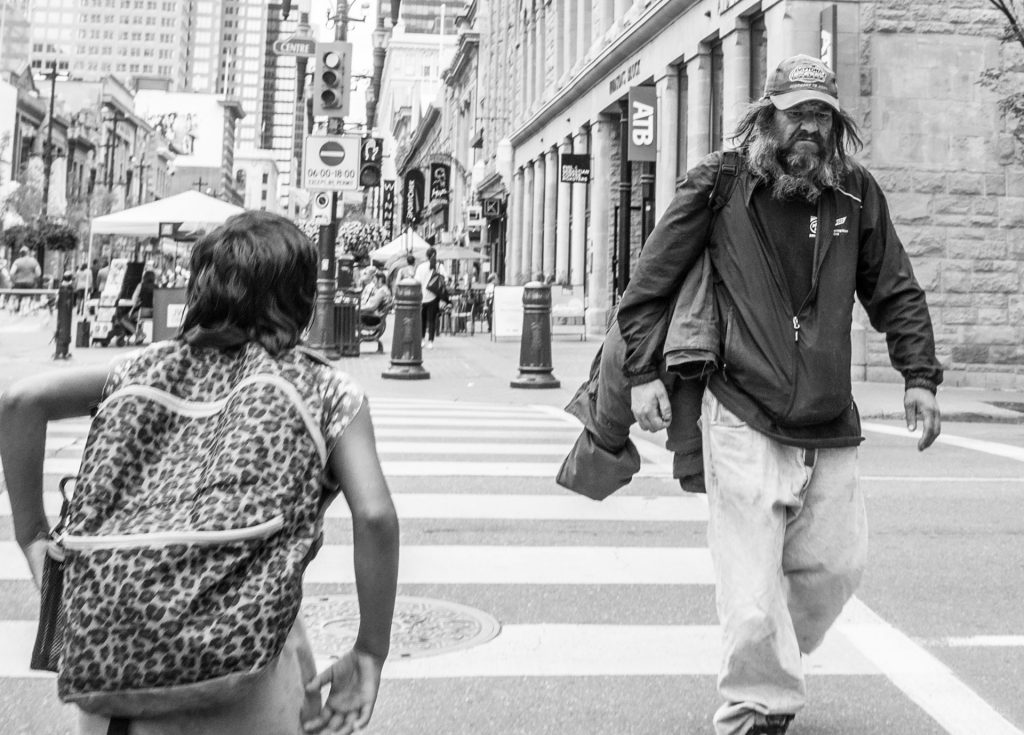 “This image…instantly struck me as a moment when you could have been passing yourself in a throwback in time,” Chris Toombes says about his photograph ‘Life Mirrors An Image of a Former Self. “The young boy is almost a mirror image in stance of the drifter, and begs the question of the decisions made that lead to such a juxtaposition in life. From an innocent childhood to a life drifting on the streets, where did it turn so bad?”

It is a powerful, thought-provoking and dramatic photograph. When I look at this frame I am thinking about where this homeless man’s head is at. Like Chris, I wonder if the subject sees a younger, more innocent representation of himself approaching. The man has averted his gaze from the younger man. Maybe, as Toombes suggests, because he sees himself in the young man, and that reminds him of what he has lost, and it is just too painful?

“I never intended to shoot so many homeless people,” Toombes starts up again. “I am aware of the divisive debate within the street photography world. But, in the first few days of walking the Calgary streets, I was approached by a homeless guy who ASKED me to take his photo. He said : I know you’ll post my photo online somewhere, so that means I won’t be forgotten. Because, nobody sees me or gives a shit normally.”

In another shot, Toombes has captured a young homeless man with an artificial limb. The photograph amplifies the plight of the young man, not only without a roof over his head but, at the same time, an amputee.

“I nearly didn’t take it,” He admits. “The guy was just huddled up against the wall on the station platform of the local C train. But as I walked towards him he stuck out his (artificial) leg and the rest is history. It’s a very strong image and says a lot about the courage of this young man, not only having to adapt to the loss of a limb, but to also survive a tough life on the streets.”

This is one of the most powerful and paradoxical aspects of street photography, the opportunity to create a record of those who would be forgotten. Giving visibility to those who would ‘otherwise’ wander the planet ‘invisible’. Telling powerful and extraordinary stories of the mundane, unglamorous, and unknown humans of the everywhere.

To be erased and forgotten by our communities and our society, to be rendered invisible by a rapidly moving, busy world stretching toward whatever end awaits, seems heart-wrenching. To be isolated in a time of mass and immediate communication, visual and textual, seems brutal and cruel.

“With today’s connected world driven by ‘selfie’ culture,” Chris continues. “I think it’s important that we do see them. That we do record their images and we do make every effort to ensure the homeless are given respect. There are many people, not only in Canada but in the UK, who are only a couple of pay days away from joining them.”

Chris Toombes, however, is not all about documenting the homeless. His proximity to the street and his voyeuristic style is happily combined with a strong creative eye. 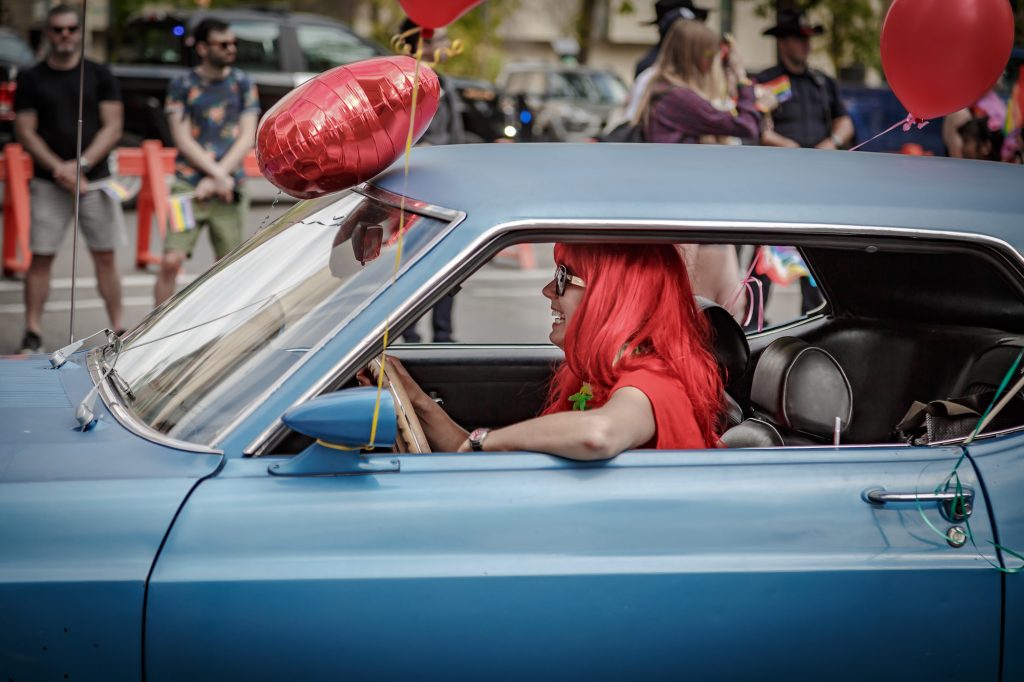 “I can simply walk out my building and I am instantly thrust into a world that totally suits my style of photography,” he reveals. “Everything I need is in the city. From capturing candid moments, shooting real life events as they unfold…social dramas as they play out. I can always point my lens upward and capture the beauty of the cityscape. I have recently been shooting more abstract architectural photos. But, street photography still remains my real passion.”

Toombes has plans. He has been sorting through his work from the last couple of years and has the idea of turning some of this material into photobooks.

“I’ve also started to print my work and by arranging them on a table helps you see the photographs in a new light,” He tells me. “printing your stuff is something I would recommend to anyone. It has helped me look at my work through different eyes and develop as a photographer.”

A thinking, creative man, who, as he has explained, pours over his work all the time. A self-confessed street photographer, who occasionally wanders around in other genre’s from time to time. Yet, we always return to the street. 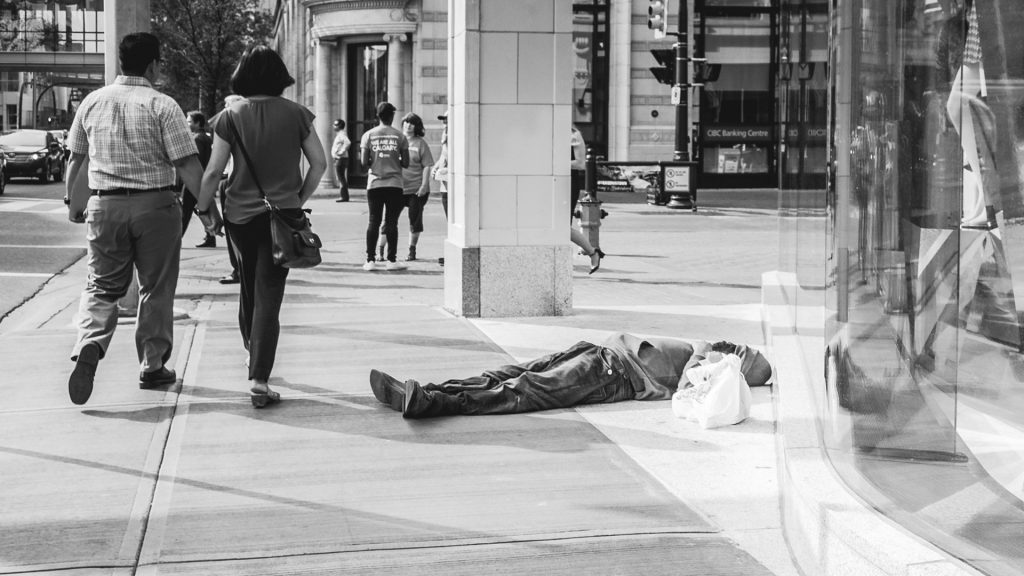 “The shot is more about the reaction from those around him, rather than the guy lying on the ground,” Toombes explains his photograph of a homeless man on his back. “Ask yourself the question : ‘If he had been well dressed in a suit, what would have been the reaction then? My guess is that the couple walking past would have checked to see if he was okay, or the local Calgary tourism street team, standing just up the road, would have also turned to check on his well-being.”

Having made his point Chris Toombes falls silent. But that doesn’t matter. As a street photographer his voice is loud enough to be heard in a visual world and for people to take notice. 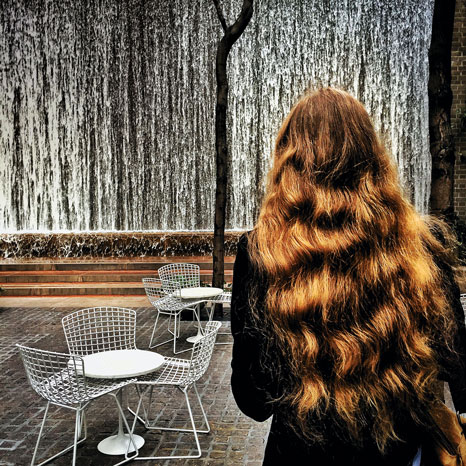